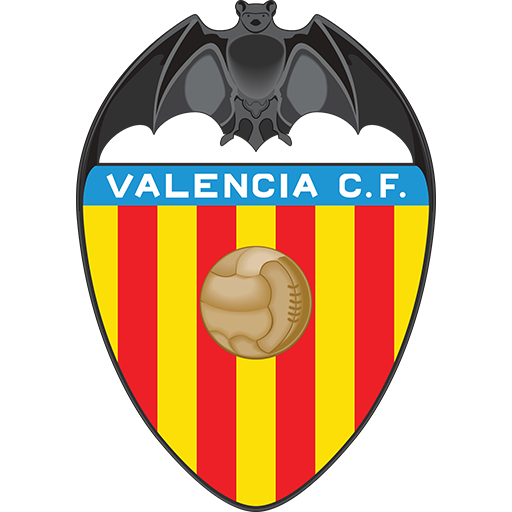 Valencia Club de Fútbol (Valencian: València Club de Futbol) commonly referred to as Valencia CF or simply Valencia, is a Spanish professional football club based in Valencia. They play in La Liga. Valencia have won six La Liga titles, eight Copa del Rey titles, one Supercopa de España and one Copa Eva Duarte. In European competitions, they've won two Inter-Cities Fairs Cups (the predecessor to the UEFA Cup), one UEFA Cup, one UEFA Cup Winners' Cup, two UEFA Super Cups and one UEFA Intertoto Cup. They also reached two UEFA Champions League finals in a row, losing to La Liga rivals Real Madrid in 2000 and German club Bayern Munich on penalties after a 1–1 draw in 2001. Valencia were also members of the G-14 group of leading European football clubs and since its end has been part of the original members of the European Club Association. In total, Valencia have reached seven major European finals, winning four of them.

Valencia were founded in 1919 and have played their home games at the 55,000-seater Mestalla since 1923. They were due to move into the new 75,000-seater Nou Mestalla in the northwest of the city in 2013, but the final move date has been postponed while the stadium remains under construction.

Valencia is the third-most supported football club in Spain, behind heavyweights Real Madrid and Barcelona. It is also one of the biggest clubs in the world in terms of number of associates (registered paying supporters), with more than 50,000 season ticket holders and another 20,000+ season ticket holders on the waiting list, who can be accommodated in the new 75,000-seater stadium.

Over the years, the club has achieved a global reputation for their prolific youth academy, or "Acàdemia." Products of their academy include world-class talents such as Raúl Albiol, Andrés Palop, Miguel Ángel Angulo, David Albelda, Gaizka Mendieta and David Silva. Current stars of the game to have graduated in recent years include Isco, Jordi Alba, Juan Bernat, José Gayà, Carlos Soler and Paco Alcácer.