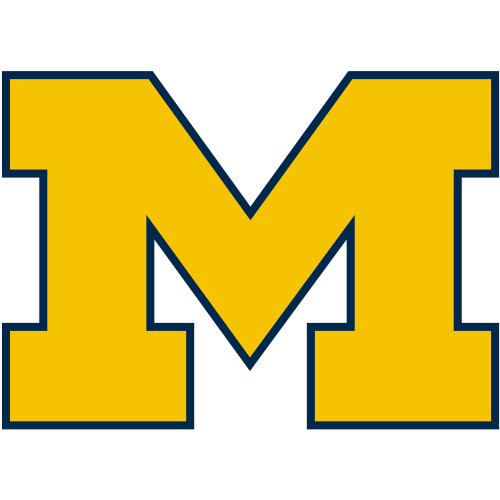 The Michigan Wolverines Men's Basketball team is the intercollegiate men's basketball program representing the University of Michigan. The school competes in the Big Ten Conference in Division I of the National Collegiate Athletic Association (NCAA). The Wolverines play home basketball games at the Crisler Center in Ann Arbor, Michigan. Michigan has won one NCAA Championship as well as two National Invitation Tournaments (NIT), fourteen Big Ten Conference titles and two Big Ten Tournament titles. In addition, it has "won" an NIT title and "won" a Big Ten Tournament that were vacated due to NCAA sanctions. The team is coached by Juwan Howard.

Michigan has had 31 All-Americans, selected 44 times. Eight of these have been consensus All-Americans, which are Cazzie Russell (two times), Rickey Green, Gary Grant, Chris Webber, Trey Burke, as well as Harry Kipke, Richard Doyle and Bennie Oosterbaan (two-times) who were retroactively selected by the Helms Foundation. Twelve All-Americans have been at least two-time honorees. Russell was the only three-time All-American.

Michigan basketball players have been successful in professional basketball. Fifty-eight have been drafted into the National Basketball Association (NBA); twenty-six of those were first round draft picks, including both Cazzie Russell and Chris Webber who were drafted first overall. The 1990 NBA draft in which Rumeal Robinson was selected 10th, Loy Vaught was selected 13th, and Terry Mills was selected 16th made Michigan the third of only ten schools that have ever had three or more players selected in the first round of the same draft. Five players have gone on to become NBA champions for a total of nine times and eight players have become NBA All-Stars a total of 18 times. Rudy Tomjanovich coached both the 1994 and 1995 NBA Finals Champions. Glen Rice is one of only nine basketball players to have won a state high school championship, NCAA title and NBA championship.

During the 1990s Michigan endured an NCAA violations scandal, described as involving one of the largest amounts of illicit money in NCAA history, when Ed Martin loaned four players a reported total of $616,000. Due to NCAA sanctions, records from the 1992 Final Four, the 1992–93 season, and 1995–99 seasons have been vacated. Throughout this article asterisks denote awards, records and honors that have been vacated.