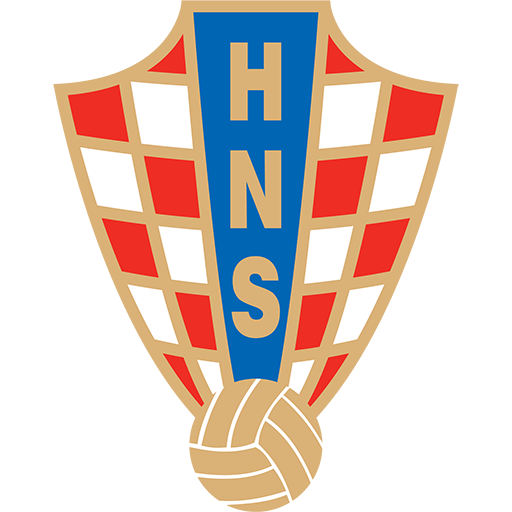 The Croatia national football team (Croatian: Hrvatska nogometna reprezentacija) represents Croatia in men's international football matches. The team is controlled by the Croatian Football Federation (HNS), the governing body for football in Croatia. Football is widely supported throughout the country due to the ever-present popularity of the sport. Most home matches are played at the Stadion Maksimir in Zagreb, although other smaller venues are also used occasionally. They are one of the youngest national teams (since formation) to reach the knockout stage of a major tournament, as well as the youngest team to occupy the top 10 in the FIFA World Rankings.

Croatia has represented itself as an independent nation since 1993, when the team was officially recognised by both FIFA and UEFA following dissolution of Yugoslavia. However, short-lived national sides were briefly active during periods of political upheaval, representing sovereign states such as the Banovina of Croatia from 1939 to 1941, or the Independent State of Croatia from 1941 to 1944. Before the current team was formed, most Croatian players represented Yugoslavia instead. The modern-day team has played competitive matches since 1994, starting with a successful qualifying campaign for the 1996 European Championship. In 1998, they competed in their first FIFA World Cup, finishing 3rd and providing the tournament's top scorer, Davor Šuker. Exactly twenty years later, under their second golden generation, Croatia reached the 2018 World Cup Final, securing second place after losing to France. Captain Luka Modrić was awarded best player of the tournament for his performances, thus making him the first ever Croatian player to win the award.

Among other nicknames, the team is colloquially referred to as the Vatreni (Blazers) or the Kockasti (The Chequered Ones). In the Italian-speaking counties the team is known as Il furioso incendio (The Blazing Fire). Since becoming eligible to compete, Croatia has only failed to qualify for two major tournaments; the 2000 European Championship and the 2010 FIFA World Cup. Their biggest defeat came in 2018 with a 6–0 loss to Spain, while their highest-scoring victory was a 10–0 friendly win over San Marino in 2016. The national team is also known for some long-standing rivalries, such as the Derby Adriatico with Italy, or the politically-charged rivalry with Serbia, both of which have led to controversial or disruptive matches.

The team represents the second-smallest country by population and land mass to reach the World Cup final, behind Uruguay and Netherlands respectively. At major tournaments, Croatia holds joint-records for longest period between one goal and another of a player (2002–2014), most penalty shootouts played (2), most extra time periods played (3) and most penalties saved in a match (3). They are also one of only two teams—along with Colombia—to be named FIFA's "Best Mover of the Year" more than once, winning the award in 1994 and 1998. Upon admission to FIFA, Croatia was ranked 125th in the world; following the 1998 World Cup campaign, the side rose to third place in the rankings, making it the most volatile team in FIFA Rankings history.